Occasionally a composer decides that one keyboard instrument is simply not enough, even if their piece is only for one percussionist. In some cases, there is time for a player to take a few steps from, say, a vibraphone to a marimba and back again. In other circumstances, the changes happen so fast that a stacked keyboard setup becomes necessary.

Stacked keyboards is when one keyboard instrument is positioned to be above or across from another keyboard so that the player can play both instruments at once or in rapid succession. In my experience, the most common variation of this is to have a glockenspiel on a stand higher than a xylophone. This is probably the most ideal setup, as a stacked glockenspiel is not too much trouble given its small size, and integrating it into a xylophone part is very player-friendly as xylophone mallets often sound just fine on a glockenspiel. When a vibraphone is in use, it needs to be positioned closest to the performer. If the vibraphone is positioned, say, above and across from a marimba, the performer will not be able to reach and manipulate the pedal.

Of course, these setups can often get much more ambitious. One particularly demanding part that I’ve played was in Kaija Saariaho’s Graal Théâtre. My pitched setup included vibraphone, xylophone, glockenspiel, and crotales; I can’t even remember how many drums I had in addition. Below is a little sketch of the pitched setup that I used: 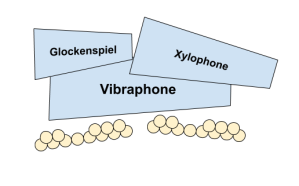 For this case, I stood at the vibraphone as usual, with the crotales tucked right up against it (bending the vibraphone-being-closest rule but not hindering the pedal). I condensed it as much as I could to make the rapid changes possible, but needing to bow some of the accidentals on the lower octaves of the vibraphone made some of the positioning particularly tough.

Rapidly moving between keyboard instruments often creates some inevitable compromises with mallet choices. There were moments in this piece where I chose to use hard vibraphone mallets while playing all over this setup; plastic mallets would certainly have sounded better for the brighter instruments, but given that the vibraphone was the focal point of the music, I needed mallets that would not only sound good there but also not damage the bars.

Stacked keyboards can put some limits on what is physically possible in a piece. For instance, some passages might require the arms to cross in a way that isn’t possible. Check out the below example (which I just made up, it’s not from a piece):

As a reminder, the marimba is stacked above the vibraphone (which happens to be why I like this notation). In this passage, the arms would almost certainly get tangled by beat 3, making the latter half of the bar extremely uncomfortable if not impossible. Note that the raised height of the marimba would make a doubled left hand from the and of 2 to beat 3 very difficult, at least at a moderate to fast tempo. In any case, it’s important to mime your way through a passage that poses such problems.